What Is The Minimum Wage in New York? 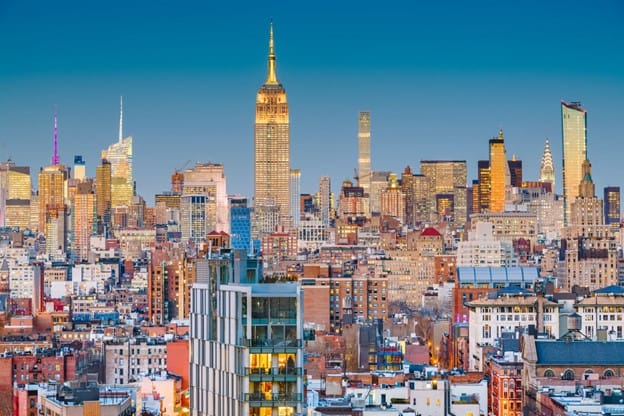 Many factors come into play in the earnings conversation, the more prominent ones being location, industry, and the employer. There are state laws that define the basic bottom rate of income, but they differ depending on site and business placing. While the location is a factor, another actor in the play is, in fact, who the employer is, as sometimes different vocations have different regulations in place.

But, we have done our research and prepared a guide that will help you understand different types of minimum wage. To start it off, we need to take into account:

The Minimum Wage by Business Type

How could business type affect minimum salary? Simple: salary thresholds and tips. Depending on the size of a business, the salary threshold changes, as stated: for the administrative, professional, and executive exemptions under state law, a large employer, with 26 or more employees, must pay a salary of at least $1,120 per week beginning January 1, 2021. Employers with fewer than 26 employees must pay a minimum wage of at least $1,040 in 2021. With these thresholds in place, the minimum wage rate moves somewhat upwards, forcing large employers to shift the wage rates proportionately to the number of employees they have.

As the Free Labor Standards Act states, any work over the 40 hours per week margin is considered overtime work. In New York State, as in most other states, this applies with a 1½ pay rate. For example, the base pay of $15 per hour becomes $22.5 per hour. Some residential employees receive the rate for all hours after the 44th instead of the 40th work hour for the week. Minors under the age of 16 may not profit from overtime as they are limited to forty-hour work weeks, while those older than that may work up to eight hours overtime per week but are limited to eight-hour workdays.

The types of leave we differentiate are many, some of which are: sick leave, maternity leave, holiday leave, casual leave, or even a sabbatical leave – to take some time to work on other projects. Depending on the type of leave, it will determine if it is paid or not. Most time off, like sick and personal leaves, is gained through working hours. For example, sick leave is calculated per pay period. A person who has two pay periods per month gets four hours per pay period, gaining a total of eight hours a month. That may accumulate to four days a year of paid sick leave. Depending on the profit and number of employees in a company, the employer has to offer paid or unpaid leave of at least 40 hours a year. This depends on the general number of employees and income. If the company has 0-4 employees and a net income of less than $1 million, the employer must offer at least 40 hours of unpaid sick leave; if the company’s net income is more significant, the employer must provide at least 40 hours of paid leave. Regardless of income, if a company has from 4 to 99 employees, the employer must offer at least 40 days of paid sick leave, and if the company has more than 100 employees, they must be provided at least 56 days of paid sick leave per calendar year.

The Minimum Wage in Tipped Work

Even though the minimum wage needs to be satisfied, there is more than one way of doing so, which creates the difference between regular and tipped work. As most service workers gain extra income through tips, that yield is also accounted for in the New York minimum wage. For instance, as the minimum cash wage for food service workers in NYC is $10, the employer receives a $5 tip allowance per hour to fulfill the hourly wage mandated by the state. There are, of course, exceptions and days on which employers can not use tip credits. These are regulated through simple rules, such as – an employer can not use tip credit if the employee worked at least two hours (twenty percent of their shift) on non-tip type work or when the employee received less than the average per hour tip. The average tips are decided beforehand and listed out.

As labor costs are different for different labor standards, the price of work changes accordingly. To fulfill the minimum salary, service workers get a fixed amount somewhat smaller than the general cash wage, which is later filled through a tip credit to accommodate the difference. Service work wages change with the location of the work. Tips at restaurants and all-year hotels vary heavily in comparison to resort hotels and their neighboring restaurants.

Similar to service workers, food service employees and fast food workers get a smaller wage (around 67% of the base) which is filled through tips. One of the most prominent New York employers is the ever-growing restaurant industry. Restaurant employment has continuously been increasing since the ’90s, with a sudden fall in the 2020 pandemic. The significant contrast in the number of restaurant workers could create a certain disbalance in the economic ecosystem.

The Minimum Wage by Location

The main factor in determining minimum salary is location. While there is a federal minimum wage setting it to $7.25 per hour, we face a minimum wage increase as we observe different states and even different parts of some states. This change is due to an ever-changing dynamic and flow in individual states. The economy is much like the ocean; it has waves and currents which move through and bring and take what they will. The movement and changes in demographics automatically change the general minimum wage in an area. Many small employers in a region create an influx of workers at a low salary threshold. Every minor element can have a major impact on finances.

NYC is the most active area in the state. Therefore, the minimum wage is drastically different, standing at an incredible 106% increase of $15 per hour. Obviously, it is still regulated by the differences set in place between regular and tipped workers, setting it to $12.50 for service workers with a $2.50 tip credit and $10 for food service workers with a $5 tip credit. The average tip rate for resort hotels is $8.40, and for all-year restaurants and hotels, the rate is $3.25 in New York City.

Leaving the city, there is a notable wage rate change from the aforementioned $15 to a slightly lesser $14 per hour. Setting service workers to $11.65 with a tip credit of $2.35 and food service workers to $9.35 and a tip credit of $4.65. There are apparent changes in Long Island as of 2021 where the wages seem to be following those of New York City. The average tip rate for resort hotels in Winchester County and Long Island is $7.85, and for all-year restaurants and hotels, the rate is $3.05.

The Rest of the State

The final topic is – what happens when the rules of minimum wages and overtime do not apply to someone? The answer is simple: they become an exempt employee. An exempt employee is a person whose job is usually of a professional nature and, as such, not paid on an hourly basis. With that in mind, they can not gain benefits from either minimum wage or overtime rules. But it is not as if there are no rules to regulate this type of work, as there are some in place. In New York, exempt employees are usually those whose job nature fits an executive, outside, administrative or professional role, including some computer workers and most jobs that are somewhat self-managed such as casual babysitting.

A simple example of this is a fisherman for minimum wage or an airline employee for overtime, as those simply can not apply. To be eligible to be an exempt employee, your salary needs to be at least $684 per week, and you need to work on a salary basis. Your job title or duties also need to define you as one of the aforementioned types of work.

If you are not sure whether you are paid fairly for your labor even after extensive research – contact Cilenti & Cooper. As a law firm that specializes in protecting employees from unlawful discrimination and recovering unpaid wages, they will most certainly be able to give you specific and up-to-date information about your situation; and provide appropriate help if needed.